About 225 years ago in Durham County in North East England, the Shorthorn breed had its founding. Achievers - strong calibre people who had gained notoriety in areas of agriculture, public service, politics and industry, created the breed.

A Mr. Colling selected a bull at a sale and mated him with his brothers newly acquired expensive cow - "Duchess". The progeny were the basis of a new breed with desirable traits - larger frames, powerful and docile oxen. They were claimed to be of superior mothering qualities and produced above average quantities of milk.

As the breed matured there in the Valley of the Tees, emphasis was placed on improving the traits. As the reputation of the cattle spread, Scotland was the destination of some animals. With vigilance on up-grading the breed, exports occurred to other countries.

Scotland's chief exports became Scotch Whiskey, Clydesdale horses and Shorthorn Cattle. From the Valley of the Tees unfolded a breed useful for big frames, beefy and a natural capacity for fast and efficient conversion of feed to food. Combined with docility, the breed was unequalled.

Early Canadians preferred Shorthorns - the pioneers called them the universal breed. They liked the big framed red, or roan, or white cattle for dairy products, food and working oxen. Canada's first imported cattle were likely Shorthorns. Incoming settlers looked to England and Scotland for seed stock. When the first Canada Herd Book was published in 1867, shorthorns were included. The breed traces animals back to as early as 1825 in North America.

The demand in Canada for excellence in the breed saw many animals imported over many years from notably Scotland. Eventually two distinct types of Shorthorns were developed - those with beef characteristics and those with strong dairy qualities. Canadian Shorthorns of today rate very prominently worldwide. It's interesting to note that beef animals have been exported - to Scotland and many other countries.

The qualities desired in the breed initially went on over the centuries to be refined to the excellent stature that the breed enjoys today.

The Shorthorns of today are medium framed with mature females in the 1400 - 1600 pound range and bulls ranging from 2200 - 2400 pounds in working condition. They are available both horned and polled with homogeneous polled genetics also available. The main colour variations are solid red, red with white markings and roan which gives commercial producers different options to select from to suit their situation.

The maternal value of Shorthorn genetics have always been a strong trait and will continue to be. The Shorthorn female, purebred or crossbred has long been sought after for its early maturity, fertility, ease of calving, milk production, and longevity and let’s not forget docility. Take your pick of the traits you require and Shorthorn genetics can adapt to your situation.

In the area of performance the breed takes a back seat to no one in the overall picture. While the average daily gain is usually average or slightly above, feedlot operators quickly determine that Shorthorn influence feeders excel in the areas of feed conversion and cost per pound of gain. Recent large scale tests results in Alberta and British Columbia only magnify these traits in comparison to other breeds and crosses.

Carcass traits in the past have been an area where the exotic or terminal breeds have excelled. However with the more recent return and focus on a moderate carcass with consistent superior marbling, the carcass traits of the Shorthorn breed have become more popular. Feedlot tests reveal that Shorthorn influence cattle reach the optimum carcass weight at an earlier age with a higher percentage of AA + marbling. While exotic breeds will claim more muscling and larger rib-eyes they cannot compete with the consistent, well marbled, high yielding Shorthorn carcasses.

Maternal strength passed on from generation to generation, adaptability to most any situation and competitive performance and carcass traits available only through the Shorthorn breed ensure our place in the future of the beef industry. As a commercial or purebred breeder you owe it to yourself to experiment with Shorthorn genetics to ensure that you are a part of the future of the beef industry as well.

Shorthorns Recognized for both Maternal and Feedlot Advantages

Using Shorthorn in your commercial base has long been known as one of the most effective ways to get great mother cows. Whether you use Shorthorn in a British cross with Hereford or Angus or in a cross with European based breeds you will get added milk and wean off heavy marketable calves.

Shorthorn bulls are active aggressive breeders and we get many reports of bulls being used in commercial herds for several years, often up to eight years. Shorthorns come in three colors Red, White and Roan. Red cattle may be solid red or have white markings. Solid reds are often used to help maintain solid colors in crosses. The whites and roans can be used on black cattle to get both blues and blacks. With the Shorthorns steer’s great ability to marble in the feedlot and for Shorthorn heifers to go into herds and make great brood cows, animals exhibiting Shorthorn coloration are becoming more valuable. More commercial cattlemen are incorporating Shorthorn genetics into their herds. Shorthorn genetics have been used in establishing over 50 breeds of cattle around the world. 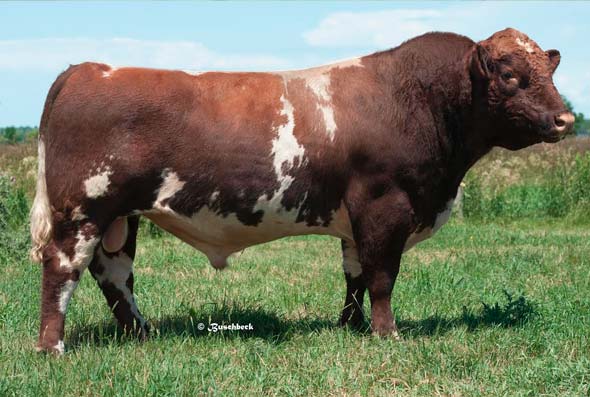